OK, so longer than a week since my last post…

I was playing Toby on Wednesday and had dug out some of my indian figures for him to use in a Later Muslim Indian army. I hadn’t used the Indians in about three years. Under the old DBM lists the chariots were rated as iKnS  – which made them very powerful. The new DBMM lists have them as iKnX or iCvS which is far less attractive. Although the army is pretty powerful frontally, there are hedgerows that can outmanoeuvre it and any competent opponent can rip it apart fairly quickly. It is pretty though….

All the figures are Xyston – probably my favourite manufacturer. The figures are superb- lots of detail, and with lots of variety in each pack. Sticking on shields/spears increases the variety of poses even further. The archers in the pic above are Mountain Indians, as are the tribesmen to their right. Solid figures who reappear in many guises when needed (especially the tribesmen who morph between  PkF/Ax/BdF etc). The hordes to the rear were constructed from various leftover figures , including quite a few Athenian rowers! 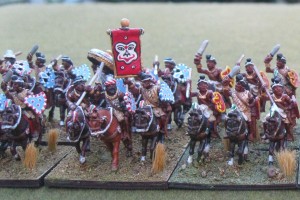 The cavalry look especially pretty and I like the way the banner turned out (based on an illustration of the god Hanuman that I found on the web). Unfortunately as irregular CvI, they are good for little more than guarding the baggage. 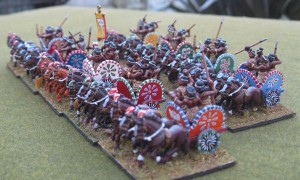 I had fun painting the chariots – probably got a bit carried away with a bit too much colour. Mind you, having seen some of the painted lorries on modern Indian motorways, it wouldn’t surprise me if they were painted as gaudy as this.

I also rather liked the general’s ‘Grumpy Elephant’ banner. Hopefully the massed chariots at least look intimidating to any likely opponent.. 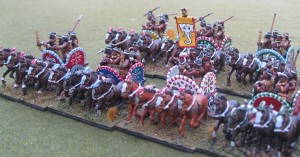 Elephants, got to have a lot of elephants in any Indian army…. These  have three crew on top and bowmen/swordsmen below- definitely El Superior. The Xyston elephants are quite nice, but have long trunks and won’t quite fit on a 40mm square base  – hence the diagonal pose. 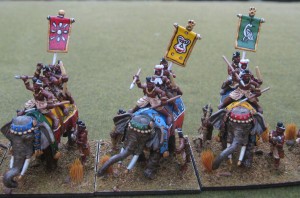 A general’s elephant with the parasol..

More infantry. The archers on the left are the more typical indian type (with fewer clothes). The shielded infantry are irregular BdI – shields decorated with various Harrapan/Indian symbols gleaned from Omniglot.

Lastly, a close up of those irregular Blades flanked by some clubmen (iBdX) and guardsmen (BdO). Behind the lads with the big choppers are the Maiden Guard…

That’s it for now. I’m currently trying to finish up my Han Chinese army ready for 2014. Also re-vamping my Carolingians. Will post pics in the nearish future.