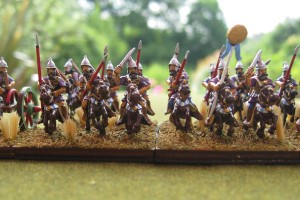 The Assyrian came down like the wolf on the fold,
And his cohorts were gleaming in purple and gold;
And the sheen of their spears was like stars on the sea,
When the blue wave rolls nightly on deep Galilee…

For my first post I thought I’d add some pictures of the Assyrian army I used against Toby this week. I’m still working on a 400pt version of this army – previous incarnations have done well at Britcon but very poorly at the Italian ITC. I’ve recently been using it for doubles at 450/500 pts where I think it performs better – particularly with a Mede Ally.

The figures are almost all from Museum Miniatures. I like the figures but they suffer from generally having only a few poses. Replacing cast spears with pins, mixing what figures they have and painting uniforms in various shades helps break up the mono-pose appearance a bit.

Firstly the cavalry, sweeping down on some unfortunate fold…. 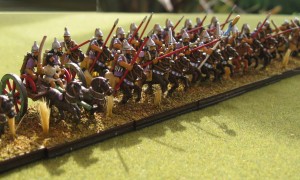 Flanked on one side by a Kallipani chariot (AxS/PsO)and on the other by some light horse archers (LhF) and lead from the front by General Sin-shumu-lishir. 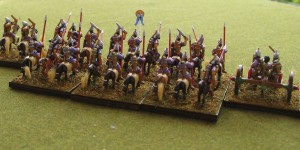 Next the infantry: Kisir Sharruti (AxS) in the front rank, supported by archers (PsO)  and with Sha Qurbute (SpO/S) behind. Prince Sin-shar-ishkun lurking alongside keeping an eye on his brother… 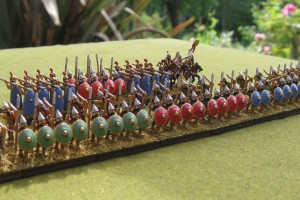 Rear view of the same group. 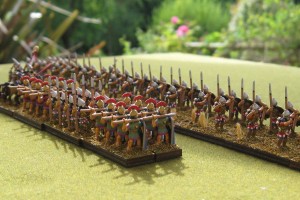 The Assyrian Divine Chariot, flanked by the massed hordes of the Dikut Mati. The front ranks of each element are the Museum Babylonian and Judean spearmen. The second ranks are a mix of biblical figures scrounged from friends. The banner is from the Little Big Man Sassanid transfers. 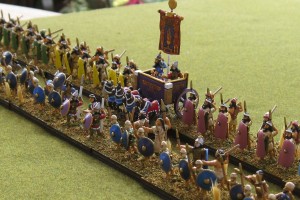 Baggage elements, featuring a row between two Imperial Tax collectors and a hairy-arsed wagon driver. Said row about to be settled by the ‘Youth with baseball bat’. Also featuring some wretched looking prisoners. Not the most beautiful of sculpts from Museum. Frankly, if I’d captured them, I’d give them back… 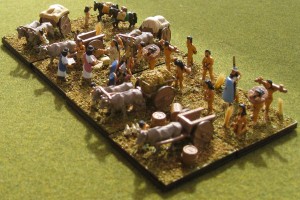 King Ashurbanipal about to do some serious smiting beneath his fancy umbrella….. 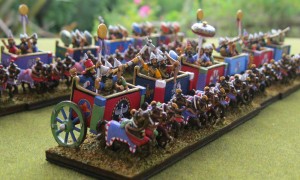 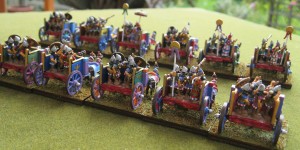 And the widows of Ashur are loud in their wail,
And the idols are broke in the temple of Baal;
And the might of the Gentile, unsmote by the sword,
Hath melted like snow in the glance of the Lord.